Shigeyuki Kihara has been awarded the Paramount Award at the 21st Annual Wallace Art Awards. Shigeyuki was presented with the award on Monday night for her digital performance video work entitled Galu afi; waves of fire, in which she performs a taualuga (a Samoan dance) as a memorial to the victims of the 2009 tsunami in American Samoa, Samoa and Tonga. This is the first time video art has been admitted into the running for the awards, established by arts patron Sir James Wallace, 21 years ago.

“… the moment we saw this work we were mesmerised. It’s such a beautifully classic piece of work.” – Art writer Warwick Brown, one of the 2012 judges. 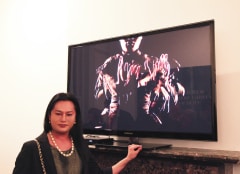 About the winning work:

Shigeyuki Kihara, Galu Afi: Waves of Fire, 2012, digital video, 4 min 59 sec
The silent performance video work entitled Galu Afi: Waves of Fire is an extension of Kiharaâs recent solo dance performance and video work entitled Taualuga: The Last Dance (2005). Galu Afi explores the ancient Samoan dance form of taualuga as choreography, with Kihara dressed in the guise of a demure Samoan woman in Victorian mourning dress. This choreography
describes the movements of the Tsunami in September 2009, which took the lives of more than 189 people in American Samoa, Samoa and Tonga, and is physically in conversation with the sequential analysis of photographic fracturing of time, which references 19th century Western Futurist photographers. While Futurist photographers such as Eadweard Muybridge and Etienne Jules Marey used photography as a tool for the analysis of dynamic motion, Galu Afi looks back into history to reveal the wisdom of indigenous belief systems.