A mid career survey exhibition of photographic and performance works by Shigeyuki Kihara ‘Undressing the Pacific’ opens at the Hocken, 20 April 2013

Born in Samoa of mixed Samoan and Japanese heritage, Shigeyuki Kihara migrated to New Zealand as a teenager in 1989. Last year, Kihara was honoured with the Wallace Arts Trust Paramount Award and she received a New Generation Award from The Arts Foundation. These honours mark Kihara’s growing recognition as an international artist, whose career to date includes a solo exhibition at the Metropolitan Museum of Art (2008) with works and performances presented at the Asia Pacific Triennial, Auckland Triennial and the upcoming Sakahan Quinquennial held at the National Gallery of Canada in May 2013.

Despite having had her art exhibited at the Metropolitan Museum of Art in New York, Kihara’s work has never before been shown in a public gallery in the South Island. The exhibition ‘Undressing the Pacific’ opening at the Hocken Library on 20 April redresses this anomaly.

‘Undressing the Pacific’ is a mid-career survey exhibition of Kihara’s art practice that spans a decade of her impressive career and draws attention to key works. The exhibition’s title reflects the centrality of dress in Kihara’s oeuvre. She studied Fashion Design and Technology and initially worked as a stylist before coming to prominence as a multimedia and performance artist. 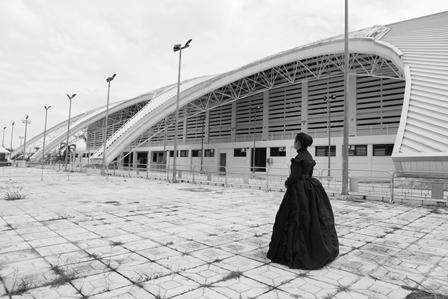 In 2001, Kihara’s work, Teuanoa’I Adorn to Excess (1999), a set of 28 T-shirts that toys with corporate branding and the stereotyping of Pacific peoples, created controversy when they were exhibited at Te Papa Tongarewa. Her Savage Nobility (2002) series of photographs incorporates the language of art direction, fashion styling and photography, and in her triptych Fa’afafine: In the Manner of a Woman (2005), she showcases the Pacific custom body adornment.

One particular costume – the Victorian mourning dress – features prominently in Kihara’s work. This garment, introduced to Samoa by Victorian missionaries in the late nineteenth century, is worn by the artist in her performance Taualuga: The Last Dance (2006-2011) and in her most recent photographic series Where Do We Come From? What Are We? Where Are We Going? (2013).

As well as referencing the importance of dress to Kihara’s practice, ‘undressing’ describes the way in which her works subvert historical cross-cultural representations of Pacific people and the framing of the landscape as a Pacific paradise. By interrogating late nineteenth and early twentieth century images of Samoan people and landscapes by European photographers, her works expose inequalities and complexities within the structures of power associated with sexuality, gender, race and colonialism in the Pacific.

Kihara’s Samoan Couple (2005), from her Fa’afafine: In the Manner of a Woman series, subverts the stereotype of Samoan woman as ‘Pacific belle’ and Samoan man as ‘noble savage’ similar in style to the late nineteenth century ethnographic and tourist images by New Zealand photographers including Thomas Andrew and Alfred Burton. The triptych from which this series takes its name explores the Samoan cultural phenomenon of the fa’afafine – a third gender community of Samoa – and critiques the imposition of European concepts of gender and sexuality onto colonial peoples.

Kihara’s work also interrogates historical representations of the landscape of Samoa. As well as being a Dunedin-based studio photographer, Alfred Burton was the official photographer on board the Steam Ship Company’s first commercial tourism venture to the Pacific Islands of Fiji, Samoa and Tonga in the 1880s. At a time when New Zealand was looking to expand its political influence and commercial interests in the Pacific region, Burton’s nineteenth-century images of the Pacific landscape, which represented it as lone indigenous figures in a natural paradise ripe for consumption, may be seen as being complicit with the project of colonialism.

The dusky maiden stereotype of the Pacific woman as seductive temptress continued throughout the twentieth century and was key to the kitsch 1960s paintings of Pacific women on velvet by Charles McPhee. The sophisticated art direction of Kihara’s self portraiture photographic series Tales of Ancient Samoa (2004), also included in this exhibition, mimics McPhee’s portraits in order to subvert that stereotype.

Kihara’s solo dance performance Taualuga: The Last Dance (2006-11) involves her performing the taualuga, a graceful ceremonial dance set to a chant sung by village elders, to retell the cultural legacy of colonialism. The work conveys the sense of loss and struggle for power that characterises Sāmoa’s colonial past, from an indigenous perspective.

In Siva in Motion (2012), which premiered in the Auckland Art Gallery exhibition ‘Home AKL’ in 2012, Kihara uses the choreographic movements of the taualuga dance to re-tell the experience of the tsunami that effected Samoa in September 2009. Kihara’s performance Galu Afi: Waves of Fire (2012), a sister work to Siva in Motion (2012) won the Paramount Wallace Arts Trust Award in 2012, also features in ‘Undressing the Pacific’ and comprises a silent dance that reveals the wisdom of indigenous belief systems.

In the wake of Cyclone Evan and the island nation commemorating 50 years of independence from New Zealand colonial rule, Kihara travelled to Samoa in December 2012 to produce a new body of work. Where Do We Come From? What Are We? Where Are We Going? (2013), a series of 20 black and white photographs, was the outcome of this visit. Five works from this series are included in this exhibition.

With its title lifted from a large scale painting by Paul Gauguin completed in 1897 shortly before his death in Tahiti, this latest series unpacks the myth of the Pacific as paradise established by Burton, subsequent image-makers and the tourism industry. While Gauguin’s painting addresses his struggle with the meaning of existence, Kihara redirects this sentiment to examine issues currently shaping Samoa including natural disasters and the global recession. Her recent works also highlight local architectural forms and monuments that commemorate Samoa’s past under German (1900-1914) and New Zealand (1914-1962) colonial administration.

In Taualuga: The Last Dance (2006-2011), Siva in Motion (2012) and Galu Afi: Waves of Fire (2012) and Where Do We Come From? What Are We? Where Are We Going?, Kihara appears as a female figure wearing a Victorian mourning dress similar to that found in the nineteenth-century photographic portrait by New Zealand Photographer Thomas Andrew entitled ’Samoan Half Caste’ (1886). This modest and restrictive style of dress was introduced to Samoa during its colonial administration.

A selection of late nineteenth and early twentieth century ethnographic photographs and tourist images sourced from the Hocken’s Photography Collection will be displayed alongside the group of works by Kihara that critique historical representations of Samoa.

‘Shigeyuki Kihara: Undressing the Pacific’ is on show at the Hocken until 8 June 2013.

University of Otago Symposium on the work of Shigeyuki Kihara

A public symposium, coinciding with the exhibition ‘Undressing the Pacific’ and designed to stimulate original research into the work of Shigeyuki Kihara, will be held at the University of Otago on Saturday 4 May. Sponsored by the Cultures, Histories and Identities in Film, Media and Literature Research Network of the University of Otago, the symposium will broadly interrogate Kihara’s creative work, artistic development, and the critical issues that it raises from diverse disciplinary perspectives.